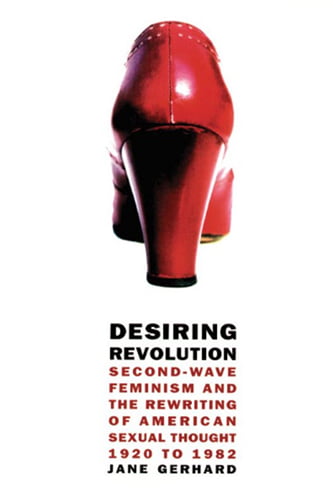 There was a moment in the 1970s when sex was what mattered most to feminists. White middle-class women viewed sex as central to both their oppression and their liberation. Young women started to speak and write about the clitoris, orgasm, and masturbation, and publishers and the news media jumped at the opportunity to disseminate their views. In Desiring Revolution, Gerhard asks why issues of sex and female pleasure came to matter so much to these “second-wave feminists.” In answering this question Gerhard reveals the diverse views of sexuality within feminism and shows how the radical ideas put forward by this generation of American women was a response to attempts to define and contain female sexuality going back to the beginning of the century.

Gerhard begins by showing how the “marriage experts” of the first half of the twentieth century led people to believe that female sexuality was bound up in bearing children. Ideas about normal, white, female heterosexuality began to change, however, in the 1950s and 1960s with the widely reported, and somewhat shocking, studies of Kinsey and Masters and Johnson, whose research spoke frankly about female sexual anatomy, practices, and pleasures.

Gerhard then focuses on the sexual revolution between 1968 and 1975. Examining the work of Betty Friedan, Germaine Greer, Erica Jong, and Kate Millet, among many others, she reveals how little the diverse representatives of this movement shared other than the desire that women gain control of their own sexual destinies. Finally, Gerhard examines the divisions that opened up between anti-pornography (or “anti-sex”) feminists and anti-censorship (or “pro-sex”) radicals.

At once erudite and refreshingly accessible, Desiring Revolution provides the first full account of the unfolding of the feminist sexual revolution.