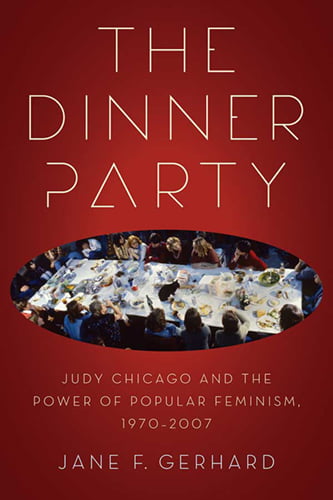 “This thoughtful history and analysis of Judy Chicago’s 1979 ‘feminist blockbuster,’ The Dinner Party, its provocative relations with the art world, feminism, and popular culture, and eventual transformation from ‘controversy to canonization,’ gives second-wave feminists an opportunity to relive their turbulent roots while educating younger women―especially artists―about the struggle for rights and respect they take for granted.”

Judy Chicago’s monumental art installation The Dinner Party was an immediate sensation when it debuted in 1979, and today it is considered the most popular work of art to emerge from the second-wave feminist movement. Jane F. Gerhard examines the piece’s popularity to understand how ideas about feminism migrated from activist and intellectual circles into the American mainstream in the last three decades of the twentieth century.

More than most social movements, feminism was transmitted and understood through culture―art installations, Ms. Magazine, All in the Family, and thousands of other cultural artifacts.

But the phenomenon of cultural feminism came under extraordinary criticism in the late 1970s and 1980s Gerhard analyzes these divisions over whether cultural feminism was sufficiently activist in light of the shifting line separating liberalism from radicalism in post-1970s America. She concludes with a chapter on the 1990s, when The Dinner Party emerged as a target in political struggles over public funding for the arts, even as academic feminists denounced the piece for its alleged essentialism.

The path that The Dinner Party traveled―from inception (1973) to completion (1979) to tour (1979-1989) to the permanent collection of the Brooklyn Museum (2007)―sheds light on the history of American feminism since 1970 and on the ways popular feminism in particular can illuminate important trends and transformations in the broader culture.